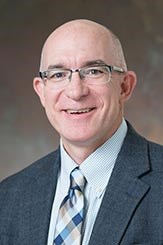 Justin Doherty was promoted to senior associate athletic director for external relations in 2015 after serving nearly four years as associate athletic director for external relations. He oversees brand communications, marketing, video services, community relations, facilities branding and is liaison to the Big Ten Network. He orchestrated a re-organization of Wisconsin’s external communications units in 2019, placing an emphasis on storytelling and brand engagement. In addition, he serves as sport administrator for the UW men’s and women’s basketball programs. Doherty has also overseen UW’s ticket office, served as liaison to Badger Sports Properties and trademark licensing and served as sport administrator for men’s and women’s track and cross country and men’s and women’s soccer. Prior to his most recent administrative appointment, he served as assistant athletic director for communications (2006-08), director of athletic communications (2001-05) and associate sports information director (1994-2000) at Wisconsin.

Doherty was the day-to-day public relations contact for the Badger football program from 2001-07. During that time, Wisconsin played in six bowl games and Doherty promoted five Badgers who became finalists for major national awards, including College Football Hall of Famer Joe Thomas, the 2006 Outland Trophy winner. In his role as associate SID, Doherty was the primary publicist for the Badger men’s basketball team (including the program’s trip to the 2000 Final Four) and was the secondary contact for the football program during a period in which the Badgers won back-to-back Big Ten and Rose Bowl titles. Doherty was the sports information director at North Dakota from 1992-94 and was an assistant SID at Northern Michigan from 1990-92. He was the media relations contact for the Wildcats’ 1991 NCAA Division I hockey national championship team.

Doherty managed the long-track speed-skating venue’s media workroom at the 2002 Salt Lake City Winter Olympic Games and was media coordinator for the 2006 NCAA Men’s Frozen Four held in Milwaukee, as well as the 2008 NCAA Men’s Hockey Midwest Regional in Madison. Doherty earned a B.A. in journalism from Michigan State in 1988, and a master’s degree in journalism from Wisconsin (Madison) in 2003. He has participated in both the Sports Management Institute and the Division IA Athletic Directors Institute. Doherty completed Seth Godin’s altMBA program in November of 2019. He also served on the board of directors of Destination Madison (formerly the Greater Madison Convention and Visitors Bureau).

Doherty has been a member of the College Sports Information Directors of America (CoSIDA) since 1990. He served 10 years as a member of the CoSIDA Board of Directors and was the organization’s president in 2009-10. Doherty was inducted into the CoSIDA Hall of Fame in 2013. He was the recipient of CoSIDA’s 2011 Arch Ward Award, which goes to someone who has made an outstanding contribution to the field of college sports information, and who by his or her activities, has brought dignity and prestige to the profession. He was instrumental in CoSIDA’s move to formally affiliate itself with NACDA and helped hire CoSIDA’s first executive director. He earned nine CoSIDA awards for excellence in publications. Doherty was the 2008 Scoop Hudgins Outstanding SID Award winner.

A native of Southfield, Mich., Doherty and his wife, Martha, have a grown daughter, Erin.