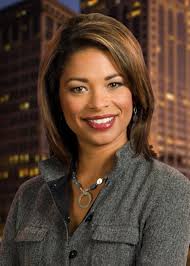 Toya Washington works at WISN 12 News, the ABC affiliate in Milwaukee, where she co-anchors the 5 p.m. newscast. Previously, she was a co-anchor for the 6 p.m. newscast, as well as a co-anchor and reporter for “12 News This Morning.” Washington, an Emmy winner and four-time nominee for reporting breaking news, covered the 2004 presidential campaign and has interviewed prominent national figures such as former Wisconsin Gov. Tommy Thompson, former Wisconsin Sen. Herb Kohl and legendary television news anchor Walter Cronkite. Washington caught the television news bug during a high school internship at WCCO-TV in Minneapolis. She graduated from the University of Wisconsin-Madison with a major in journalism and women’s studies. She has been an active member of the National Association of Black Journalists (NABJ) and was involved with Big Brothers/Big Sisters while working in Madison. She now lives in Pewaukee with her husband Brian and daughters Alivia and Maya.