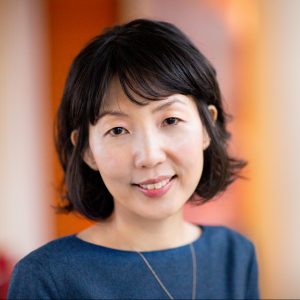 For a media brief about Kim’s recent research, “The Stealth Media? Groups and Targets Behind Divisive Issue Campaigns on Facebook,” click here.

Young Mie Kim is a Professor of the School of Journalism and Mass Communication and a Faculty Affiliate of the Department of Political Science. Kim is an Andrew Carnegie Fellow.

Kim’s research, “The Stealth Media? Groups and Targets behind Divisive Issue Campaigns on Facebook,” identified “suspicious groups,” including Russian groups on Facebook ahead of the 2016 elections. It received the Kaid-Sanders Award for the Best Political Communication Article of the Year by the International Communication Association. Her work appeared on more than 400 national and international media (The New York Times;WIRED; BBC) outlets. Kim also actively engages in public scholarship to work toward policy solutions for malicious actors’ disinformation campaigns and microtargeting on digital platforms. Kim testified at the Federal Election Commission‘s hearings on the rulemaking of internet communication disclaimers. She presented her research and provided expert opinions at the Congressional briefings on foreign interference in elections, the Honest Ads Act, and other technology policy matters. Kim was also invited by the European Data Protection Supervisor, the European Union’s data protection authority, to speak at the European Parliament on her research on data-driven political advertising and inequality in political involvement.

During her faculty career, Kim’s research has developed a program of research on how the digital media environment contributes to the changing foundation of political communication. Her research theoretically explains and empirically demonstrates that the digital media environment has set a condition to facilitate the development of passionate publics who care about a particular issue almost exclusively based on their values, identities, and self-interests. Kim’s research also demonstrates that in the data-driven digital age, political actors—including malicious foreign groups—identify, target, and mobilize passionate publics. Kim’s research illuminates the contemporary outlook of passionate issue publics, issue advocacy groups, and political leaders in the age of data-driven digital media.

Kim has been teaching 15 different courses on a wide range of subjects including digital media, political communication, mass communication, and strategic communication. Integrating her research expertise and her passion for public service, Kim has developed a service learning course, Communication and Community Service: Technology for Social Change, where her students partner with a community organization and experiment with the democratic potential of digital communication technologies. The class project, Savor South Madison, garnered a number of accolades including the Best Service Learning Practice and the Innovator in Community-Campus Partnership.

Kim received her Ph.D. from the University of Illinois at Urbana-Champaign and was a Visiting Fellow of the Oxford Internet Institute at the University of Oxford, United Kingdom. As the Microsoft Visiting Professor of the Center for Information Technology Policy, Kim also taught a course, Politics in the Age of Digital Media, in the Department of Politics at Princeton University.