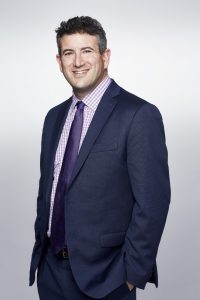 Graduation Year and Degree: 1990 BA in History and Political Science with a minor in Soviet and East European Studies

Like all industries, the world of sports has had to make big changes to adapt during the COVID-19 pandemic. Along with the changes that leagues, teams, athletes and staff have made, journalists have needed to get creative in order to cover sports both safely and effectively.

Andy Katz is one such journalist who has been at the forefront of covering college sports throughout the pandemic. Andy got his start at UW-Madison writing for the Daily Cardinal, and has remained passionate about supporting student journalism, most recently through a gift to The Black Voice to get new equipment to expand their reporting.

With March Madness on the horizon, we reached out to Andy to hear about how the tournament will look this year.

The pandemic has drastically altered the college athletics landscape, both for athletes and the people covering sports. What do you see the NCAA Men’s Basketball Tournament looking like this year? What challenges do you think journalists will face in covering the action?

The NCAA tournament will be like no other. Having it in the entire state of Indiana, mostly in the metro Indianapolis region, was the only answer. The NCAA needed to come up with a plan to be under one set of testing protocols from one county, not just one state. The 68 teams will be under strict rules and it will be more of a controlled environment and limited movement rather than a complete bubble. But I still believe we will get a tremendous event, especially without the travel aspect in between rounds. Journalists will have a hard time covering this event. That’s a fact. I work for the rights holder and I have incredibly limited access. The plan is not to have any face-to-face interviews with players or coaches. Everything will be virtual. So that alone will make covering this even more daunting. But it will be a television event and that will make it worth getting March Madness in for 2021.

Wow. How long do we have? I’ve been doing this for 30 years, but I could go back to day one at the Daily Cardinal in September of 1986. I knew then what I wanted to do. I came through a more traditional newspaper path—Daily Cardinal, Wisconsin State Journal, Milwaukee Journal, Albuquerque Journal, Fresno Bee to ultimately 18 years at ESPN before leaving in 2017. But that path isn’t as direct anymore. What I did do is adapt. Those that didn’t have not made it through these turbulent, choppy waters. For years now I have been my own producer, editor and shooter on the road and now during the pandemic at home. You must be able to write, speak, interview, record and produce your own content. There are countless examples to share in a different platform as to how I was able to accomplish these things during changing times. But learning how to ask questions, listen, interpret, report and deliver the news is a must. And don’t stop pursuing your dream.

What is your favorite journalism memory of your time at UW?

Covering the Indiana-Wisconsin triple overtime game my freshman year in 1987 at the old Field House. That game is still one of the greatest I’ve seen in person. I bookended my career there by working for the Milwaukee Journal as a senior when the men’s hockey team won the national title in Detroit in 1990. That coverage, and front page stories, ended up helping me land my first full-time job in Albuquerque.