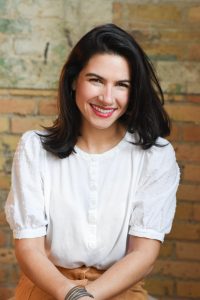 Title: Author of the forthcoming novel All The Blues Come Through, out June 11.

Metra Farrari is a self-described nap-time novelist. “I stay at home full-time with my twin three-year-old boys and four-year-old daughter,” Farrari said. “In my ‘free time,’ I have written my debut novel called All The Blues Come Through.” The first in a trilogy, she says it’s meant to satiate those adult millennials who grew up devouring YA dystopian and contemporary fantasy novels like Hunger Games, Harry Potter, Divergent and Twilight. “The Princess Diaries meets mythology, it’s a witty tale of a painfully single, cat-crazed female botanist who has convinced the descendants of the Olympians that she is the heir of Artemis (evidence shows it’s likelier she’s the heir of DiGiorno, what with all the frozen pizza she consumes),” Farrari said. We caught up with her to hear more about this project. 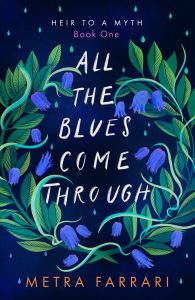 When it comes to this book, what are you most proud of?

This novel was like the little engine that could; there were so many obstacles (hello surprise twin pregnancy!), so many hard lessons learned (apostrophe etiquette has evolved since J202!), so many times I could have easily written it off as a hobby (“I no longer write, I’ve moved on to succulent horticulture”) and called it quits. But I was absolutely convinced that bookworms like myself, who rely on fiction escapism as a form of self-care, would relish in this saga and world that I’d created, honed and loved. Publishing this book convinced me that I possessed determination and persistence that I didn’t know I had.

Ask for what you want. During my last semester at the J-School, a member of the Board of Visitors came in to speak during one of my lectures. I was awestruck by this Badger alum with such a high profile job, whose background and interests mirrored my own (Journalism degree, Minnesota-raised, pop-culture obsessed). In that moment, I dared to dream: if her, why not me too? So I shakily walked over to Cindy Mori (BA’89), then the head of Talent Booking at The Oprah Winfrey Show, and asked about opportunities to work for her. The confidence I faked and the assertiveness that felt so foreign to me worked! I started an internship under Cindy after graduation and humbly worked on the last three seasons of The Oprah Winfrey Show. That pivotal moment of cause and effect — asking for what I wanted — has shaped who I am and has guided me through the rigorous path that is publishing.

When we say “J-School,” what do you think of?

When I think of J-School, I think of the most unassuming, almost intimidating physical structure that happens to house the heart of the campus. I hear Katy Culver’s laugh, smell Jim Baughman’s pipe, feel the stress of a news quiz and see the shuffle of students trudging in and out of the Daily Cardinal office. Most importantly, I feel the pride and carry the legacy of not only being a Badger, but gratefully being an alum of the J-School.