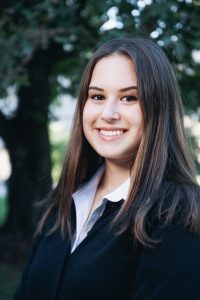 Stella Porter was awarded the Eric Miller PantherVision Scholarship which honors a student for their excellence in broadcast journalism, video editing and visual storytelling. Porter was a reporter on the Badger Report and interned at NBC-15 Madison.

The Eric Miller PantherVision Scholarship recognizes a student with demonstrated commitment to excellence in broadcast journalism, video editing and visual storytelling. The scholarship awards $2,000 to a student in Wisconsin at the Milwaukee Press Club Gridiron Awards dinner on May 10.

Stella Porter is a senior from New Jersey studying reporting in the University of Wisconsin-Madison School of Journalism and Mass Communication. She is the host of Bascom Beat on WSUM 91.7FM Madison student radio where she previously served as news director and co-created News Hour, an award-winning weekly political news show featuring Wisconsin state senators, top polling experts and live election coverage. Her love of broadcast journalism flourished during time as a reporter and anchor for the Badger Report, an SJMC live streamed television newscast. She has interned at NBC-15 in Madison and plans to work in television news upon graduation in May.