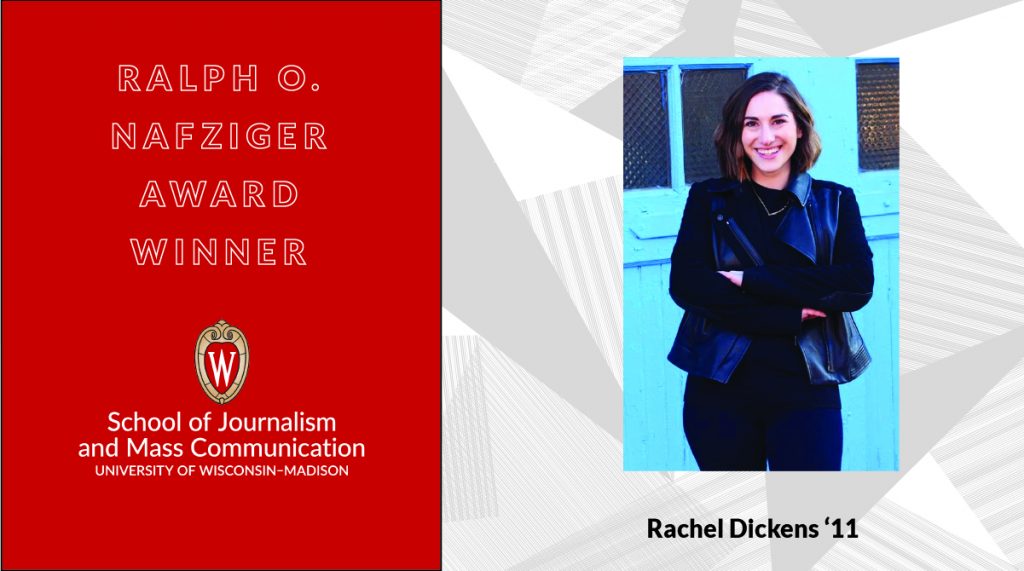 Rachel Dickens is a 2011 graduate of the UW-Madison School of Journalism and Mass Communication, with emphasis on strategic communication. She currently serves as the manager of marketing communications at Molson Coors Beverage Company based in Chicago. While at the J-School, Dickens learned the importance of finding ways to communicate uniquely.

What is a project that you’ve worked on in your career so far that you are most proud of?

I have two!  I’m extremely proud to have been part of the opening team for a restaurant in Chicago called Pacific Standard Time (which has since closed due to the pandemic). In my former job, I was the director of marketing and PR for One Off Hospitality Group, which owns and operates some of the city’s best places to eat and drink. When I came on board, Pacific Standard Time was about one year away from opening, and it was my job to lead the pre-launch PR and marketing strategies. The restaurant’s concept was fascinating: debunking conventional “California-style” cuisine. The menu was less about avocado toast and acai bowls, and more about the true roots of California cooking, which draw heavily on Japanese and Italian influences. The best decision I made in the pre-opening process was getting the word out as early as possible, and exhausting every story angle imaginable. By design, Pacific Standard Time became the most anticipated restaurant opening of the year – we even landed a story in Wired about the old-school practice of cooking with fire, but done in an innovative, “new-school” way. For a restaurant in Chicago, being covered by outlets like the New York Times, Vanity Fair and Vogue is a huge deal, and the pre-opening buzz culminated in Pacific Standard Time being packed to the gills from day one. Eater Chicago named it “Restaurant of the Year,” and the space received a James Beard Award for Outstanding Restaurant Design. While it’s no longer open, that restaurant will always have a place in my heart.

Since joining Molson Coors in early 2019, I’ve had the chance to work on campaigns across nearly all of our core brands, but my absolute favorite was the relaunch of Coors Light under our current creative platform, which is called “Made to Chill.” Long story short, Coors Light was in a well-known period of sales decline through much of the 2010s. The brand had tried on a number of campaigns and brand purposes, but none of them were really sticking. We knew we needed to fully relaunch the brand with new packaging and a new voice, so we leaned into what people already know and love about Coors: the Rocky Mountain heritage, and the age-old association of Coors as “the world’s most refreshing beer.”  Instead of taking those qualities literally, we went in a more emotional direction: metaphorical “chill” as a partner-in-crime to our literally chilled beer. We linked Coors Light to the sense of refreshment and rejuvenation that you feel when you’re able to finally tune out the noise of your day and have a moment all to yourself, which was especially relevant in 2019. My favorite part of the campaign is its universality. Since launching under the new platform, we’ve released creative and brand activations that resonate with a substantially wider group of people than Coors Light ever has before – take our “Bra” ad, for example, which depicts a woman in a way no other beer brands are doing. I get so excited when historic brands undergo massive changes – there’s something magical about taking a product or a concept that people think they know and challenging those assumptions with a new perspective. Since launching the “Made to Chill” campaign, Coors Light has seen positive trends across nearly every key brand-health metric, as well as several consecutive quarters of share growth in the light beer category.

What is the best advice you have for a J-School student who wants to do what you do?

When you work in PR, no matter the role or sector, you’re uniquely poised to show how skilled you are at communication through every interaction you have. Think about it: we’re all communicating, all the time — those of us who work in communications just happen to be the professionals. We have endless opportunities to show how we communicate — sometimes it’s as simple as telling a great story at a team lunch, even if the conversation itself has nothing to do with work. This realization was huge for me when I was starting my career. I wasn’t satisfied with having a nicely formatted resume or an expertly edited writing sample — it irked me that a hiring manager could receive those materials without understanding how I actually interacted in the wild. In other words, I needed to own the narrative of how I was being perceived as a job candidate, particularly when I didn’t have a lengthy work history to attest to my strengths. I needed to imbue every interview, every networking conversation and every follow-up email with as much “me” as possible. The catch is that you have to really know yourself in order to pull this off, because what you’re ultimately conveying is a sense of self-possession. Some college students already have this, but many don’t — my 22-year-old self included. To get started, I’d suggest you determine the three qualities that make you different from the thousands of other job applicants out there – in my case, I’ve received feedback that I’m tenacious, curious and unexpectedly casual in my communication style (and I agree with those characterizations). Make sure every important interaction you have ladders up to those core qualities, and think about how to shine a light on them when you think no one’s looking. I’m guessing everyone reading this already knows the importance of having great mentors, but I’ll also second that trope. If you can find a mentor who sees your specific potential, I’d encourage you to be open to their advice and follow their lead until your footing feels strong enough that you can guide yourself forward.

What do you think of when we say “J-School”?

This sounds corny, but I think of the professors! I can’t describe how excited and nervous I felt when I first took a class with Dhavan Shah, because I knew he’d worked for Leo Burnett earlier in his career. That was my equivalent of meeting a celebrity. A few years ago, Katy Culver congratulated me on an award I’d received from Adweek, and it took me all the way back to my J201 days of wanting nothing more than to impress her. It’s like the academic version of playing professional sports and knowing you couldn’t have done it without the lessons you learned from your college coaches.