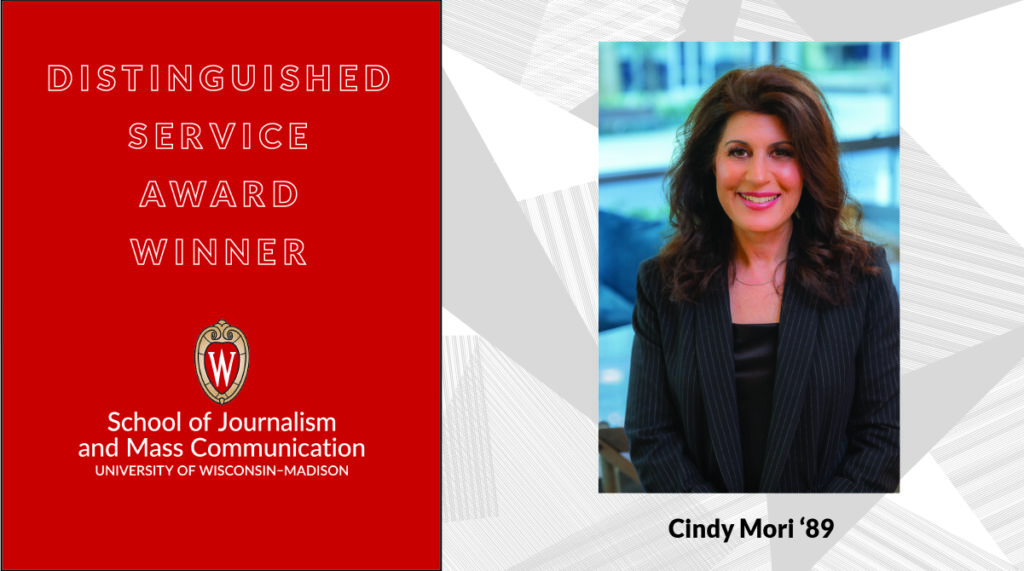 Cindy Mori is a 1989 J-School graduate and currently, the Vice President of Global Talent Management & Corporate Talent Development for Discovery & OWN Networks. Mori has had a successful career in broadcast news and TV, working at major stations like CNN and ABC News before joining the Oprah Winfrey Network. Her time in the J-School instilled confidence in her and also provided strong mentorship.

After graduation from UW-Madison in the Spring of 1989, I moved to Washington, D.C. to find a job using my degree in journalism to cover politics. I owned one suit, two blouses (red and white, of course) and alternated wearing them while I literally knocked on the doors of various news organizations.

Eventually I landed a job at a small bureau and worked Monday through Friday working with on-air reporters covering Washington, D.C. for a number of local stations in the south. On Saturdays, I worked at CNN—for free. It took about a year of proving myself and a little begging until CNN hired me full time. I was an Associate Producer for the weekend talk shows and spent a lot of time on Capitol Hill, learning about the inner-workings of the House and Senate, the White House and meeting many politicians. After a few years in D.C., my interests expanded beyond politics and I moved to New York City to become a Segment Producer at ABC’s Good Morning America. I was often on the road tracking down a newsmaker, covering a trial or interviewing celebrities on the red carpet. It was an incredibly valuable experience as it taught me how to be extremely resourceful, an expert communicator and understand deadlines. We were live at 7 a.m. every day with or without a guest in the chair and without wasn’t really an option!

Six years of living mostly out of a suitcase was enough and I was very fortunate to land my dream job at The Oprah Winfrey Show in Chicago. It took four years longer than I had hoped and still have the original rejection letter to prove it. I began working on a production team and eventually started the guest booking department. My team and I were responsible for securing all the high profile guests on the show—from artists and athletes to celebrities and headliners. Twenty-three years later, I’m still working for Oprah and OWN in Los Angeles, booking interviews and working on special projects like “The Me You Can’t See,” the mental health series she and Prince Harry did in 2021 or the upcoming Sidney Poitier documentary for Apple TV+ . I also oversee talent management for the many shows on the network as well as others across Discovery.

Discovery is on the verge of a merger with Warner Bros. which will make it one of the biggest media companies in the world. I am excited and hopeful about what bringing our brands together will look like when we are under one umbrella with the iconic Warner Bros. movie studio, HBO Max, TNT, CNN and others. The media landscape is changing so quickly, I’m trying to focus on keeping up!

The greatest lesson I learned from my J-School education is that anything is possible. I had professors who said yes to projects outside the norm, yes to trying something new and yes, I believe in you. The educational background combined with the confidence the J-School gave me set me up to achieve my dreams.

I also learned the importance of mentorship at the J-School and found people like Jim Baughman who unknowingly or unwittingly became my mentor. In my own career and in the spirit of UW, I have also tried to give back to those who have come after me—hiring as many Badgers as possible!

My freshman year, Robert Downey, Jr. and Rodney Dangerfield were shooting the movie “Back To School” on the UW campus. I was chosen to be an extra and if you pause your VHS tape at just the right moment, you might see a glimpse of my profile walking across Bascom Hill. It was enough to give me the entertainment bug!

FOMO is overrated..study abroad for a semester!

Majoring in Journalism came with an inherent respect from the industry. In a world where media is constantly being scrutinized, news is influenced by politics and reporting accurate information is becoming more difficult, adhering to core journalistic principles and telling authentic stories is critical. Having a degree from the J-School means telling the truth, always.

PR believe or not!

The KK until my fake ID got taken away. Then it was eating popcorn on the Terrace at Memorial Union.

The wall with the pictures of accomplished J-School grads. I spent a lot of time staring at them and dreamed of being one of them.