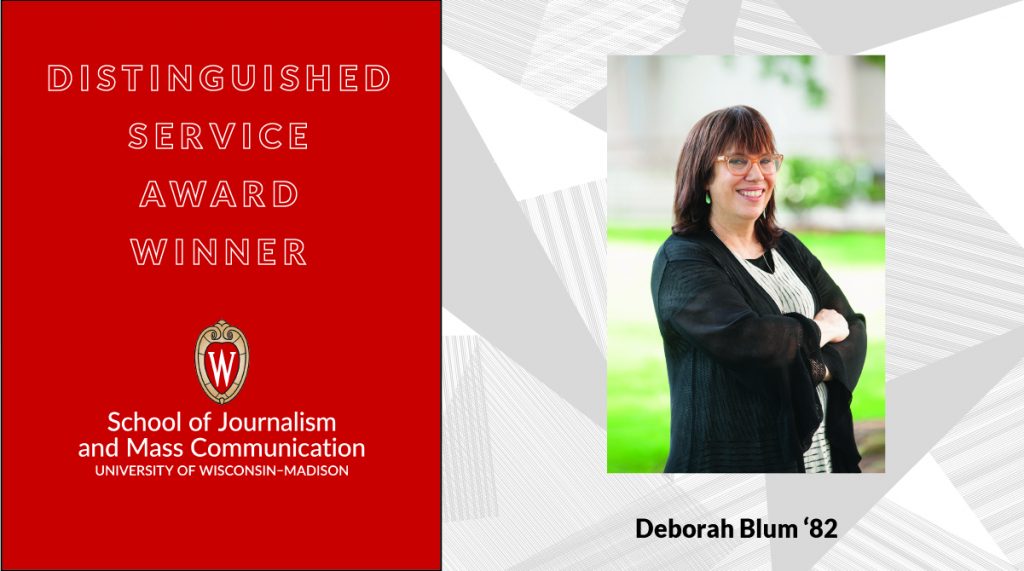 Deborah Blum, current director of the Knight Science Journalism Program at MIT, is a 1982 J-School MA graduate and is a recipient of the 2021 Distinguished Service Award. Blum’s work, which is focused on science, has appeared in Wired, New York Times and won the Pulitzer Prize in 1992 for her work surrounding primate research. Blum’s time in the J-School helped her find her specific interest in science and taught her about the importance of research.

I’ve been a working science journalist since receiving my journalism MA from the University of Wisconsin in 1982, a book author, an educator, a magazine publisher. After graduation, I worked for McClatchy newspaper as a staff science writer for 15 years, first at The Fresno Bee (two years) and then The Sacramento Bee (13 years). While at the SacBee, I won the Pulitzer Prize in 1992 for a series on ethical issues in primate research, which launched me as a book author. That series led to my first book, The Monkey Wars (Oxford) in 1994. I’ve since published five additional books, the most recent were The Poisoner’s Handbook (2010), a New York Times bestseller, and The Poison Squad (2018), a New York Times Notable Book. Both were also the subject of documentary films on PBS. Becoming a book author eventually led me also to becoming a professor of journalism at the UW-Madison SJMC, where I worked from 1997-2015, which was a terrific place to be, both as a journalist, and as an educator. I created a creative non-fiction class among others and always got a great deal of support for my creative work. I also continued as a practicing journalist while at UW, as a blogger at Wired (Elemental) and as a toxicology columnist for The New York Times (Poison Pen). In 2015, I took a job as director of The Knight Science Journalism Program at MIT, where I still am, and in 2016, launched a digital science magazine, Undark (undark.org), which now has a readership in the millions and partners with publications ranging from The Atlantic to NPR, as well as some new educational programs.

I want to continue to build and expand Undark. We’ve also launched a new project in science editing, which includes a free, downloadable handbook for people who want to learn more about how to be an outstanding editor of science stories and we’re just starting a free webinar series on science editing. You can find all that information on this page. We also have a new project on fact-checking, which includes a free teaching unit for journalism schools and others interested in such training — almost 40 schools are now using it — and other resources as well. Plus we will host a free, virtual fact-checking workshop in June. Information is here.  And three years ago, we launched a science journalism award for reporting at the local and regional level, The Victor K. McElheny Award. I love it because it keeps reminding me that some very good work, very good, is being done by hard-working reporters working for small publications and platforms. And, finally, last year, two other KSJ staffers (Tom Zeller, the editor of Undark and Ashley Smart, our associate director) and I signed a contract with Oxford University Press to produce a new guide to science journalism. We have a collection of amazing authors and the book is due to the publisher in June.

When I was in grad school, my advisor, Clay Schoenfeld, who had a joint appointment in journalism and wildlife biology, steered me into taking history of science classes. He said that all good science journalists should be backgrounded in science history so that they could put modern findings in perspective (and also not be fooled when someone claimed to be the first at something when they weren’t). That really shaped my career, both because it added real depth to the way I approached science stories and influenced my decision as a book author to write about science history (Love at Goon Park, Ghost Hunters, The Poisoner’s Handbook, The Poison Squad). And I learned an incredible amount at Wisconsin about how to be a good and meticulous researcher, studying under Jim Baughman and Sharon Dunwoody. Those lessons also shaped my career.

Hanging out with some other really smart grad students (wine and popcorn at the Nitty Gritty after class), cross-country skiing in the winter, including on Lake Mendota, visiting wildlife refuges like Horicon in other seasons. It’s a beautiful part of the world.

To value and hang onto your college friends and all the connections you make there. They will sometimes help your career but more importantly they will always improve and warm your life.

I knew that a grad degree focused on science journalism would do a great deal to add to my credibility. And that was entirely true. In fact, UW-Madison was one of the first universities in the country to offer a specialized reporting degree. Later, when I was on panels of journalists hosted by different science organizations, they would always highlight that. And an engineer at NASA once told me that when science journalism became a profession, when such degrees became more common, it changed the relationship between scientists and journalists for so much the better.

It’s still my favorite university in the world. Being at MIT hasn’t changed that!

Jim Baughman’s history of journalism class, because his research requirements if you were a grad student were crazy hard. I did a report for that class on magazine coverage of the 1920s Scopes trial and I still remember the hours I spent in the stacks at Memorial, tracking down the coverage of contemporary magazines. The ones in the New Yorker were hilarious.

Related to the Scopes trial, I did a series of stories on the rise of the intelligent design movement in the United States which were published in newspapers around the country. That was for my specialized reporting class and those were an insane amount of work to get right. But really fun to do.

Totally the Nitty Gritty. We were a group of basically poor grad students and we would go there, order a bunch of red wine and eat the free popcorn and talk about, well, everything. So fun. Still one of my favorite memories.

Any funny anecdotes from your time in Vilas?

Nothing hilarious. But there used to be a fudge cart among the food carts down on Library Mall and we would buy fudge and put it into coffee when we were sleep deprived and needed a caffeine-sugar high. It completely worked.