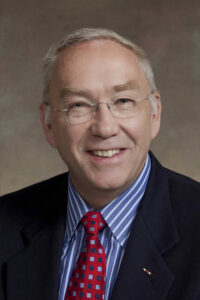 During his college days, Fox served as copy editor for the Wisconsin State Journal and eventually joined the paper full-time. He was later city editor of the Billings Gazette in Montana and editor of The Journal Times in Racine, Wisconsin. He served as executive director of the Wisconsin Newspaper Association between 2004 and 2010, during which he helped pass the state’s Whistleblower Law, advocated for open records and helped the association grow in its membership.

Fox also served for six years on the SJMC Board of Visitors and helped launch the Center for Journalism Ethics.

When it comes to this recognition, what are you most proud of?

What advice would you give to a J-Schooler who wants to do what you do?

Look for opportunities on campus or for paid/unpaid internships — and take risks outside of your comfort zone.  In order to be hired in the journalism/general communications field you need to demonstrate work you’ve done.  As an undergraduate, I was a Daily Cardinal reporter and volunteered as editor of the student publication, The Wisconsin Engineer. Those “clips” helped me obtain my part-time copy editing job at the Wisconsin State Journal.

What is your favorite J-School memory?

As an older student and veteran returning to the UW after an inglorious start four and a half years earlier and being married, I enjoyed my classmates in every class but frankly didn’t connect with them as they had different lives. Rather, my strongest connections at the SJMC was with my professors, several of whom became personal friends in later years. Their one-on-one mentoring and counsel was invaluable. In later years, I took great pride in serving on the Board of Visitors and on the board of the Center for Journalism Ethics, as well as being involved in fund-raising to benefit students and programs.