When the University of Wisconsin–Madison announced that the remainder of the spring 2020 semester would be online, the School of Journalism and Mass Communication’s staff and instructors came together quickly.

Using resources offered by campus, as well as tools they developed on their own, the J-School went into collaboration mode, working to create innovative, efficient and accessible learning options for all of its students.

“Our leadership has been outstanding – steady, calm, forward-thinking, understanding and helpful,” says Professor Michael Wagner, who teaches J335, Principles and Practices of Reporting.

Faculty are tasked with staying innovative, but then so are the students. Moving online for the remainder of the semester initially brought concerns from the J-schoolers who find solace in the fun, supportive classrooms that Villas Hall provides.

Philip Klinker is a sophomore currently enrolled in J335, a class that meets twice a week for two hours at a time. Klinker admits he had some concerns about going digital since the class is mainly discussion-based. But he says that the faculty are doing their best to make the adjustment go as smoothly as possible.

Klinker thinks J-Schoolers are making the best of the situation. “It’s also a good experience for journalists who might want to freelance or work remotely,” Klinker says. 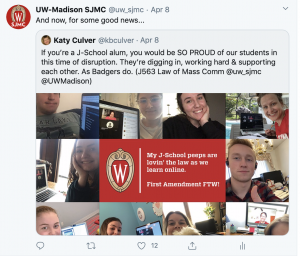 Professor Douglas McLeod, who teaches J445: Creative Campaign Messages was lucky enough to wrap up most of his lecturing for the course before going digital was the new reality.

Going digital has offered both McLeod and his class an opportunity to grow and try out new techniques to make the best of their learning. “These constraints have been more of a benefit than a hindrance,” McLeod says.

With their final, team-based project, McLeod said students have really stepped up to work together and produce their best work. They now hold meetings on Blackboard Collaborate, a Zoom-like option that allows students and faculty to hold face-to-face meetings. And Mcleod is able to go in and out of meetings just like he would in real time.

“It’s really established a new level of commitment and work to the projects to show what we can really do to take lemons and make it into lemonade,” McLeod says.

His students agree. Juliet Dupont was initially concerned with the major adjustment and what it would mean for her J445 final project. However, she was happy to see how the J-School faculty adapted quickly to going digital.

“With audio recordings over slideshows or BB-Collab meetings, my J-school professors have made the courses as similar to the real thing as they can be,” Dupont says.

Junior Johnny Bildings is enrolled in both J445 and J563: Media Law with Professor Katy Culver. When he found out things were turning digital for the remainder of the semester, he was concerned about J445 because of how “collaborative and cohesive” their final projects needed to be.

But according to Bildings, J-School faculty anticipated that uneasiness. Bildings shares that Katy Culver had her plan ready for digital class a week before UW-Madison suspended in-person teaching and that she was consistent in reaching out to students and giving them chances to express their concerns.

“It sounds a bit silly, but when you go to a school with 50,000 kids, having someone be a real cheerleader for you makes a big difference,” Bildings says.

J-School faculty have focused on making learning accessible for students, regardless of their online connectivity. Those who are meeting classes in real time record their sessions, so students with spotty broadband or WIFI can come back to them later. “My J-School classes were much more on top of being accessible than my others,” Sophomore Kalli Anderson said.

Junior Enjoyiana Nururdin says remote learning has been tough, requiring drastic changes and bringing challenges with trying to stay on task. However, the J-School faculty, she says, have been there for her through it all. “All my professors have provided resources to help us get through the semester and keep our sanity,” she said. “I’m forever grateful for them.”